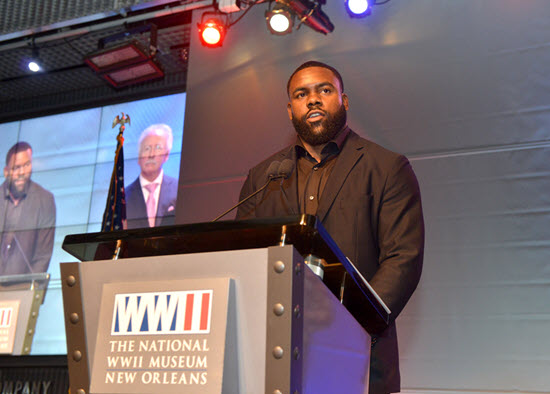 NEW ORLEANS (June 5, 2018) – Volunteers of America, one of the nation’s largest and oldest human services charities, awarded its highest honor – the 2018 Ballington and Maud Booth Award – to New Orleans Saints running back Mark Ingram. This year’s honoree was selected in recognition of his work mentoring local children, in particular those with an incarcerated parent.

A Heisman Trophy winner in 2009, Ingram has been a top NFL running back for the past seven seasons. But he is known around New Orleans for much more than his on-field success. In his rookie year with the Saints, Ingram launched the Mark Ingram Foundation to help children who have parents in jail. This is a deeply personal cause for him – from the time he was 10 years old, Ingram’s father was in jail off and on for the next 15 years. His work was recognized by the NFL Players Association, which honored him as a Community MVP.

“Mark Ingram turned his personal childhood experience into a motivating factor, and now gives back to children who are in the same situation, including those in Volunteers of America Southeast Louisiana’s Mentoring Children of Promise program. We are very proud and excited to present the 2018 Booth Award to Mark in honor of his working helping children in the New Orleans community build a solid foundation for the future,” said Volunteers of America National President and CEO Mike King.

Ingram was honored during a June 5 awards dinner hosted by Volunteers of America at the National WWII Museum in New Orleans.

Volunteers of America presents the Booth Award each year to individuals who demonstrate distinguished service to humanity. The award is named after Ballington and Maud Booth, who founded Volunteers of America with a promise to “go wherever we are needed and do whatever comes to hand.” Previous winners include Glen and Kim Campbell, Ambassador Andrew Young, Jane Fonda and Ted Turner, Nancy Reagan and Gen. Eric Shinseki.

About Volunteers of America

Volunteers of America is a national, nonprofit, faith-based organization dedicated to helping those in need live healthy, safe and productive lives. Since 1896, our ministry of service has supported and empowered America's most vulnerable groups, including veterans, seniors, people with disabilities, at-risk youth, men and women returning from prison, homeless individuals and families, those recovering from addictions and many others. Through hundreds of human service programs, including housing and health care, Volunteers of America helps almost 1.3 million people in over 400 communities. We offer a variety of services for older Americans, in particular, that allow them to maintain their independence and quality of life – everything from an occasional helping hand to full-time care. Our work touches the mind, body, heart and ultimately the spirit of those we serve, integrating our deep compassion with highly effective programs and services.